ARTICLE ON BREAK THE SILENCE 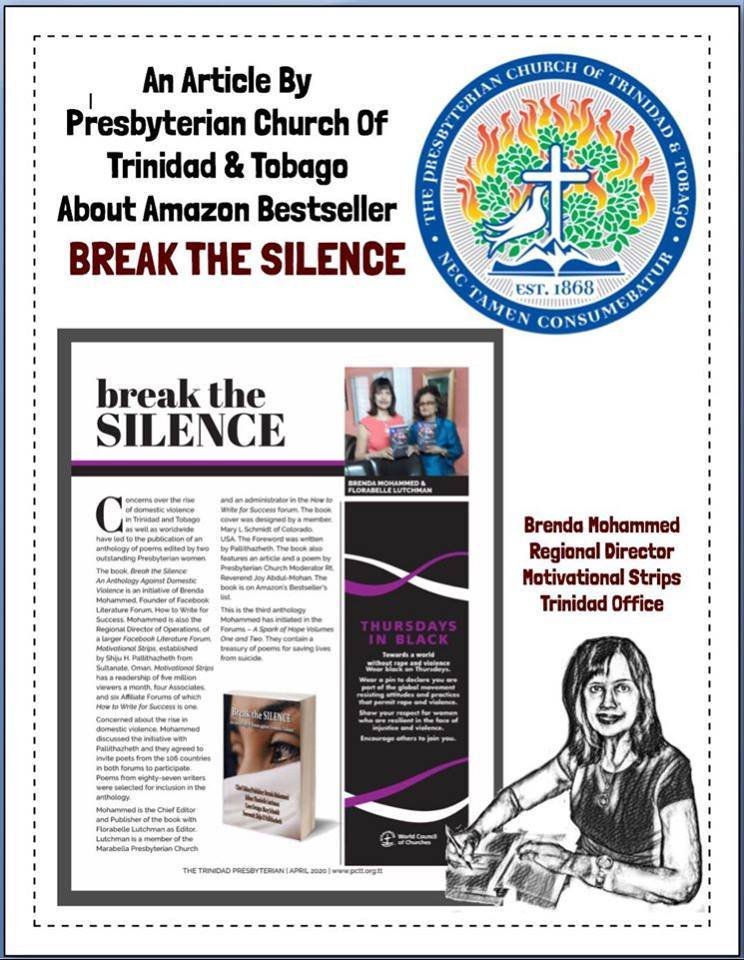 An Article about BREAK THE SILENCE appeared on Page 7 of The Online News of the Presbyterian Church of Trinidad and Tobago. Here is the article:BREAK THE SILENCEFlorabelle Lutchman and Brenda MohammedCONCERNS over the rise of domestic violence in Trinidad and Tobago as well as worldwide have led to the publication of an anthology of poems edited by two outstanding Presbyterian women.The book, Break the Silence: An Anthology Against Domestic Violence is an initiative of Brenda Mohammed, Founder of Facebook Literature Forum, How to Write for Success. Mohammed is also Regional Director, Operations, of a larger Facebook Literature Forum, Motivational Strips, established by Shiju H Pallithazheth from Sultanate, Oman. Motivational Strips has a readership of five million viewers a month, four Associates, and six Affiliate Forums of which How to Write for Success is one.Concerned about the rise in domestic violence, Mohammed discussed the initiative with Pallithazheth and they agreed to invite poets from the 106 countries in both forums to participate. Poems from eighty-seven writers were selected for inclusion in the anthology.Mohammed is the chief editor/publisher of the book with Florabelle Lutchman as editor. Lutchman is a member of the Marabella Presbyterian Church and also an administrator in the How to Write for Success forum. The book cover was designed by a member, Mary L Schmidt of Colorado, USA. The Foreword was written by Pallithazheth. The book also features an article and a poem by Presbyterian Church Moderator Rt, Reverend Joy Abdul-Mohan. The book is on Amazon’s Bestseller’s list.This is the third anthology Mohammed has initiated in the Forums – A Spark of Hope volumes One and Two. They contain a treasury of poems for saving lives from suicide.