I received a beautiful surprise from Alem Hailu of the Ethiopian Herald.

HERE IS THE LINK
I have transcribed the review below. 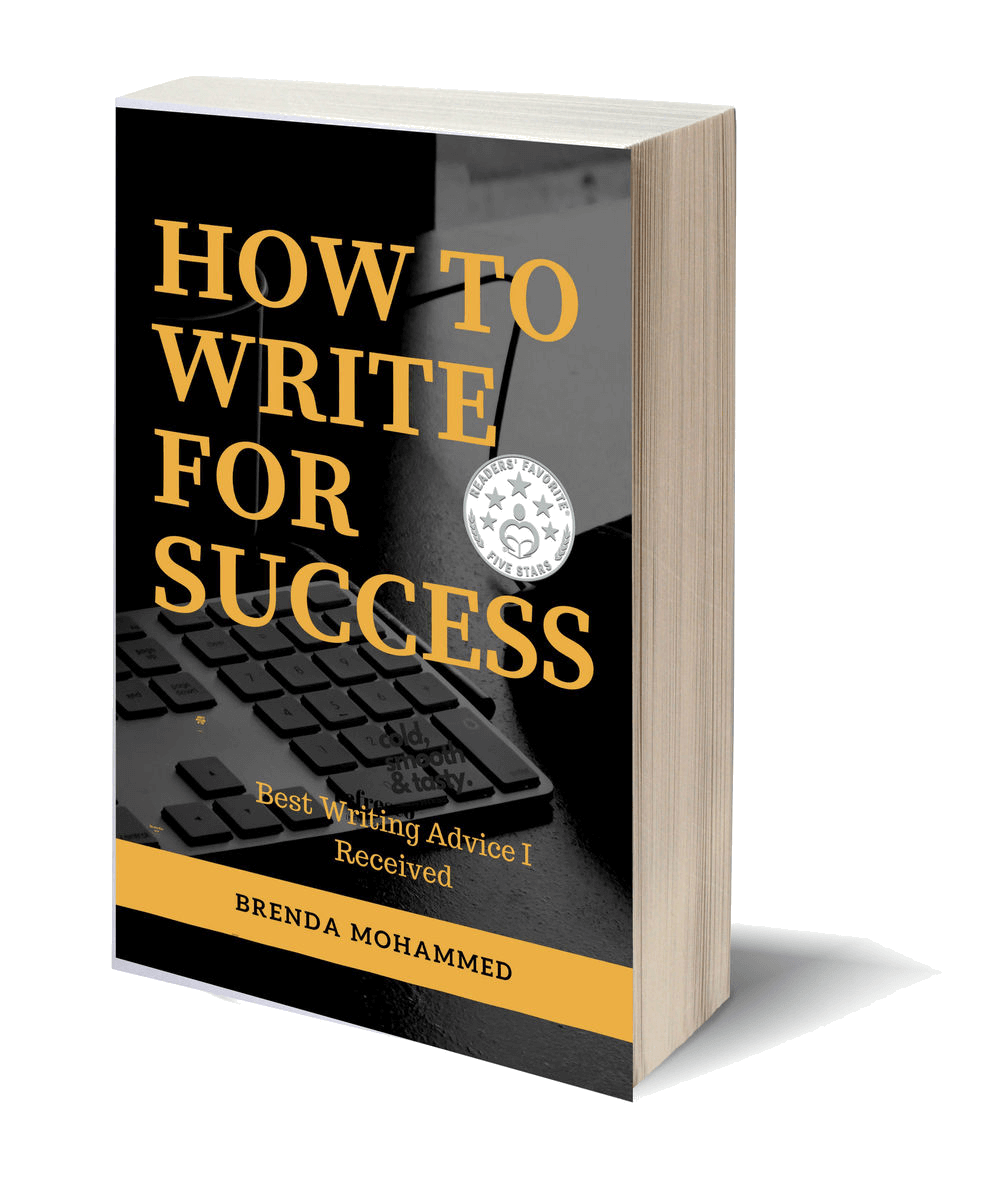 Aside from relating how the author-poet Brenda Mohammed in an exemplary manner consummated her life journey full of hairpin turns and precipices, and with success navigating the twists and turns of the arduous track of life engaging in different walks of life like insurance and banking, her book entitled HOW TO WRITE FOR SUCCESS renders a handy comprehensive toolkit for writers, critics, and editors.

As a novelist, book reviewer, and editor myself, I wish I had this book by my bedside for reference in my previous literary pursuits, for unlike other books I made recourse to, in a bid to fathom the literary devices authors, as well as book reviewers, are expected to well digest, HOW TO WRITE FOR SUCCESS profits a wide array of writers if they, in good time, upload it in their backpacks.

In demonstrating the devices, presumably at the tip of her fingers, in a vivid and lucid as well as friendly manner, no instructor comes close to Brenda Mohammed, who was in the chalk and talk business earlier in her life, before she branched off into literature.

For instance, tragically as it may sound, most of the books I read recommended “Better show than tell,” while they had the propensity of telling.
In sharp contrast to this trend, in her book “HOW TO WRITE FOR SUCCESS!” Brenda pragmatically displays the merit of show over tell by inspiring writers to go for it, reviewers to sniff it, editors to weed out flaws, and readers to know what is encumbering them to read fast, and thereby tell a good book from one that compels critics to say the game is not worth the candle.

Substantiating theory with palatable examples that remains seared on the mind, Brenda walks readers of her book through the jungle of literary devices promising a safe return.
This way HOW TO WRITE FOR SUCCESS portrays by what means authors unerringly sail to readers’ hearts.

As it is true of the other brainchildren of hers like “I'm CANCER FREE,” this one too inspires people to go for their burning dreams with a spirit of never say die against the teeth of daunting and innumerable challenges.

Using short, simple, and toothsome sentences she is a past master at making true modern style never fail to arouse readers’ appreciation.
They are showcases of the power of the pen for authors who have to emerge tall scouting the footprints of literary giants like herself.
It exemplifies poetic prose that glues to the pages of the eyes of those who happen to pick the book. Literariness is how to make things picturesque without using pictures.
Brenda is gifted in doing that simply leaning on word pictures.
She knows how to use the best word at the best place as she is a poet too, and as she states, “to make readers gravitate to you!”
Make your expressions flowery she says in flowery words.
In short, she melts the world into words inviting writers to follow suit.
It is not only in how to use the writers’ craft the page-turner book stands tall, but it also hones emerging authors’ skill demonstrating how to trim unnecessary words and expressions.
For instance, it practically shows how to avoid weak verbs or verbs modified by adverbs.
She demonstrates to writers, “He sprinted,” is by far better than “He ran quickly”.
She also shows the advantage of avoiding hidden verbs “We will announce the winner next week” to “We will make an announcement of the winner next week.”
This is a good tip for those engaged in editorship as well.
Such useful tips she raises, apply to non-fictional works too if the balance mix is well checked.

Observably, her background with an educator like her father has lent her the necessary skills to drive her point home effortlessly.
Author-poet Brenda recommends the writer has to lean on his/her intuition to effectively portray body language.
This lulu that shot up to the global helm of success advises writers to put themselves in the shoes of the character under description.
By way of exemplifying this, she says the way the writer’s body gives away his/her emotion to flattery could be easily adapted to the characters, whose behaviors and physical features have to be well expressed.
She capitalizes on the need to focus on characters’ internal dialogues, (monologues) as well as the external ones.
To engage the readers in using their feelings, HOW TO WRITE FOR SUCCESS shows the importance of using action than dialogue tags that slows the story’s pace. << Instead of “Yes,” he said>> it is better to use<< “Yes” he nodded.>>

Writers have to come up with a clean sheet as much as possible as spelling and grammatical errors could belittle them in readers’ eyes and strips them of credibility.
In a world full of skeptics, one typographical error, especially on cover pages, could make readers put an axe on the neck of the author.
It is no secret that book stations back off if a reader draws their attention to such mistakes.
I know firsthand that most publishers, even those that claim they publish for free ask for payment to correct such silly mistakes even if they know most authors are financially constrained and live in a country where the transaction of hard currency is virtually impossible.

Books that sell like hot cakes standing out from the crowd are ones that have a good blurb, advertisements and book reviews.
She advises authors to take time to produce works that wow their target readers and attract attention to the sale of their books.
“Use active voice to passive voice,” is also among the writing tips she demonstrates with better examples.
Regarding novels and short stories, the story premise must be clear for readers to keep track, she stresses.
To ram this home “Believable characters are the lifeblood of the story,” she points out.
Life in the story must not reflect a bed of roses, nor must characters be flawless and physically striking, she recommends to authors expected to evade the relegation of their work to the category prosaic.
The protagonist and main character should face physical or other shortcomings they have to overcome
Though show not tell, is recommendable narration and dialogue must be in the right mix, advises Brenda.

When painting, the setting be it historic setting— with political and cultural wrangling— or otherwise, writers have to conduct research to avoid mistakes like an anachronism.
As the story has to be believable double-checking things is a must-do.
She substantiates this with the study she conducted to craft a science fiction.
“Take readers on a literary pilgrimage!” and “Create a believable world!” “Use all of your five senses,” Brenda recommends.

Though it is recommendable to design plots at times, characters could allow the writer a room to go a bit astray in so far as this action does not contradict the main plot.
“A story arch is not set in stone!” she says.
She underlines the need to focus on subplots as well.
She appreciates plot summaries before attempting writing to evade getting sucked in a black hole.
When it comes to the narrative she advises limiting description and avoiding ramblings resorting to intriguing and dramatic situations. The problem and the story must be well-grounded.
The premise has to be clear.

Before publication, it sure is good for readers to get their book perused by friends or relatives who are avid readers.
Beta readers and editing software could render invaluable services in weeding out errors and checking self-contradictory issues.
It sure is good if a seasoned editor sees the final output before publication because a professional has experienced eyes in rendering the masterpiece a finishing touch.
She also shows how novelists could keep on writing to the end in a three months’ time setting, with a program of writing, say 500 words per day.
She also highlights the advantage of quietude such as night time, while writing as a distraction is formidable of creative art.
Her book also throws light on the significance of growing in a close-knitted, well-educated and reading family.

Above all, she capitalizes writers must well know their target audience to tailor works accordingly.
They as well should have a worldview to make their work a hit.
As I found the writer imperfectly perfect I could not find any flaws in the book.
Check this must-read yourself.

Book review of How to Write for Success
26Feb
A Spark of Hope Volumes 1 and 2: A Treasury of Poems to Prevent Syucide
09May
REVISING CONTENT OF YOUR BOOKS REGULARLY CAN ATTRACT NEW READERS
07Mar
BREAK THE SILENCE: AN ANTHOLOGY AGAINST DOMESTIC VIOLENCE
Comments