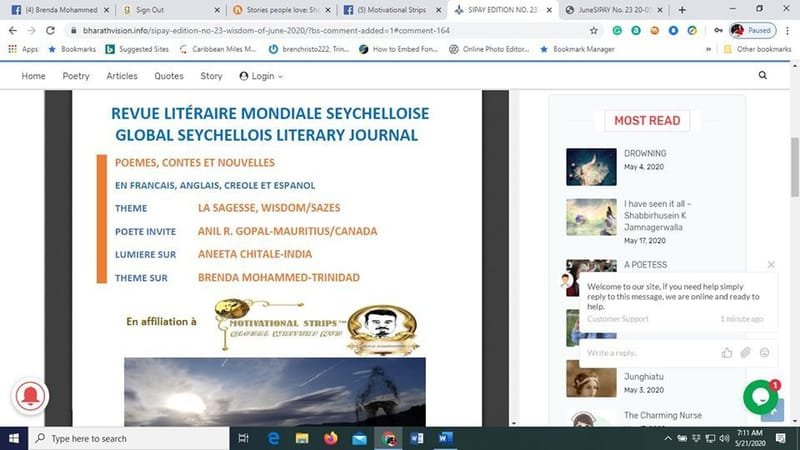 Thanks, Maggie Vijay-Kumar for including my poems in the prestigious Sipay Magazine Issue of May 20th, 2020.

Women are just girls and Men are just boys,
Who grow up quickly when they stop playing with toys.
They keep saying to their parents, ‘When I am old and wise,’
But they become separated and sometimes lose all ties.
*
Their heads are buried in smartphones and tablets,
Bills, bank accounts, and contents of their wallets.
With little mental space to reach an intelligent conclusion,
It can be difficult to accumulate much wisdom.
*
Some say wisdom is rich factual knowledge about life,
However, you can be wise and unsuccessful in life,
Wise ones live their lives rationally and reasonably,
And have the ability to recognize and manage uncertainty.
*
The words of Socrates, the wise philosopher, I’m quoting,
"The only true wisdom is knowing you know nothing.”
Wisdom resides in the accuracy of people’s opinions.
What other people think of you determine your wisdom.
*
A WISE LOVER

He is trying hard to make sense of her.
Spending time figuring out her demeanour.
Convincing himself nothing is happening to him.
But she remains forever a spark under his skin.
*
She’s angelic and magical he can see,
Drowning him daily in dreams of ecstasy.
He wonders if women like her still exist.
Imagines she’d be like summer on his wintery lips.
*
She’s a woman he cannot begin to describe.
She has crazy quirks but within beauty reside.
She projects a glowing image in the world.
He’s scared to surrender his bare naked soul.
*
He knows she’s enough and always has been.
The one he wishes to make as his queen.
She’s intelligent and ambitious, qualities he loves.
He dreams of a life with her as two turtle doves.
Copyright@BrendaMohammed

BIOGRAPHY
BRENDA MOHAMMED, a former Bank Manager from Trinidad is a multi-award-winning author of 25 books, and Founder of the Literary Forums How to Write for Success, Poems for Suicide Prevention, Library of How to Write for Success, and Poems against Domestic Violence. Her award-winning book HOW TO WRITE FOR SUCCESS is popular amongst writers and University students.
She is also Regional Director – Operations- Motivational Strips, the world’s most active writers’ forum with writers from 106 countries, Honorary Member of the World Higher Literary Academic Council of World Nations Writers Union, National President of the Union of Writers, Union Hispaniomundial de Escritores for Trinidad and Tobago, and Vice-Chancellor of Motivational Strips Academy of Literary Excellence and Wisdom,
She recently published three best-selling Anthologies A Spark of Hope Volumes I and II, co-authored by 49 and 64 authors respectively, and Break the Silence: An Anthology against Domestic Violence by 87 authors. All three topped the charts on Amazon as Bestsellers No 1.
In November 2018 Brenda received two awards from Readers Favorite International at an award ceremony at the Regency Hotel in Miami for two of her books, ZEEKA CHRONICLES and I AM CANCER FREE.
She was inducted into the Indie Author's Wall of Fame in January 2020.
On 20th February 2020, Motivational Strips conferred on her THE PEACOCK oPINION Honour, the first order and distinguished honour of appreciation that falls under LEVEL 1 in terms of all honours summed up. This award is given to authors who have shown exceptional support to World Literature. She also received further appreciation with the Shakespeare Medal Award, Global Literature Guardian Award and Global Dove of Peace Award from Motivational Strips.
Brenda was also honoured on 22nd February 2020 by the Peru Government for Excellence in Literature, and in August 2019 by the Seychelles Government for her Literary skills, and was awarded World Laureate in Literature and World Poetic Star by World Nations Writers’ Union.